Conwy became established on the banks of the Conwy estuary due to its geographical and natural location, creating an ideal spot for the establishment of an abbey.  A narrowing in the river – ideal for crossings at slack tide, a rocky elevated position – ideal spot defensively and for building dwellings, a natural sheltered harbour from the wilds of Liverpool Bay – ideal for fishing boats to moor and unload their catch, and local produce and mining products to be brought ashore or traded elsewhere.

A Cistercian house was founded at Rhedynog Felen near Caernarfon in 1186 by a group of monks from Strata Florida Abbey.  About four or five years later they moved to Conwy creating Aberconwy Abbey, a Cistercian foundation.  In 1199 the foundation were given large grants of land by Llywelyn the Great who had recently become ruler of Gwynedd.  Llywelyn was regarded as the founder of the house, and thanks to his support it came to hold more land than any other Welsh abbey, over 40,000 acres (160 km²). On Llywelyn’s death in 1240 he was buried at the abbey, and his son and successor Dafydd ap Llywelyn was also buried here in 1246. In 1248 Llywelyn’s other son, Gruffydd ap Llywelyn, who had died trying to escape from the Tower of London in 1244, was reburied at Aberconwy after the abbot of Aberconwy, together with the abbot of Strata Florida, had arranged for his body to be repatriated from London.

The abbot of Aberconwy was an important figure in the negotiations between Llywelyn ap Gruffudd and the English crown later in the century, and in 1262 was entrusted with the task of being Llywelyn’s sole representative in negotiations.

In 1282, Edward I of England surrounded Snowdonia with a massive army. On 11 December Llywelyn ap Gruffudd, Tywysog Cymru, was lured into a trap and murdered.

In 1283 King Edward I of England obliged the monks to move from Conwy to Maenan, further up the Conwy valley so he could construct a castle and walled town at Conwy.  The move had been completed by 1284, with Edward financing the building of a new abbey.  In the 15th century the abbot, John ap Rhys, became involved in a dispute with Strata Florida Abbey and led some of his monks and some soldiers on a raid on that abbey. The abbey was valued at £162 in 1535 and was suppressed in 1537.

Little remains of the Maenan Abbey buildings, but the original abbey church in Conwy was adapted to become the parish church of St Mary & All Saints and although much rebuilt over the centuries some parts of the original church remain. The other buildings of the abbey are thought to have been located north and east of the church.

Edward I, Wales and his castles

The Castles and Town Walls of King Edward in Gwynedd is a UNESCO-designated World Heritage Site located in Gwynedd, Wales. It includes the castles of Beaumaris and Harlech and the castles and town walls of Caernarfon and Conwy. UNESCO considers the sites to be the “finest examples of late 13th century and early 14th century military architecture in Europe”.

The fortifications were built by Edward I after his invasion of North Wales in 1282. Edward defeated the local Welsh princes in a major campaign and set about permanently colonising the area. He created new fortified towns, protected by castles, in which English immigrants could settle and administer the territories. The project was hugely expensive and stretched royal resources to the limit.

The fortifications played an important part in the conflicts in North Wales over the coming centuries. Notably they were involved in the Glyndŵr Rising of the early 15th century, the Wars of the Roses in the late 15th century and the English Civil War in the 17th century. By the end of the 17th century, however, the castles were ruinous. They became popular with visiting artists during the late 18th and early 19th centuries, and visitor numbers increased as access to the region improved during the Victorian period. The railway companies themselves restoring the castles in order to get the public on the trains to come and visit them. The British state invested heavily in the castles and town walls during the 20th century, restoring many of their medieval features. In 1986 the sites were collectively declared to be a World Heritage Site, as outstanding examples of fortifications and military architecture built in the 13th century, and are now operated as tourist attractions by the Welsh heritage agency Cadw.

Edward I employed an architect called James of St George to build a castle and the town walls at Conwy. It took 4 years from 1283 to 1287, and 15,000 men to build the Castle and its eight towers, perched on an outcrop of rock towering over the estuary. The walls that were 30 feet high and several feet thick, were erected at the same time to fortify the newly created town. The walls were strengthened by 21 towers and three gates.

In later centuries Conwy Castle fell derelict and it was sold to Lord Conwy in 1627. However when civil war came in 1642 the castle was repaired and garrisoned. In August 1646 the parliamentary army laid siege to Conwy Castle but they did not capture it for 3 months. Afterwards Conwy Castle was ‘slighted’ (deliberately damaged) to prevent the royalists ever using it again. 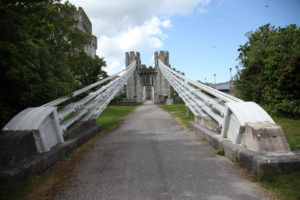 With Conwy sitting so strategically on the coast of North Wales, the crossing of the river had always been vital to trade and travel but was difficult and often dangerous, via a ferry of varying degrees of reliability and ability. The arrival of Thomas Telford’s impressive suspension bridge in 1826 put [ay to that, allowing constant and direct crossings for coaches, horses and pedestrians, putting Conwy firmly on the main coaching route to Ireland. As of 1800 and the Acts of Union, Ireland had now become part of the United Kingdom of Great Britain and Ireland, greatly increasing the need for greater and easier links with the emerald isle, hence the huge investment in what came to be known as the A5 linking London to Ireland. The Erskine was established around this time to house and refresh those travelling along the route from Chester and beyond.

In the early 18th century Daniel Defoe visited Conwy and he called the harbour a ‘noble harbour, which infinitely outdoes Chester or Liverpool itself’. The quay was built in 1833 and during the 19th century it was primarily used to export slate and by fishermen.

The Chester and Holyhead Railway was incorporated out of a proposal to link Holyhead, the traditional port for the Irish Mail, with London by way of the existing Chester and Crewe Railway. In 1848 Robert Stephenson (son of George Stephenson) designed and built a railway bridge alongside Telford’s making Conwy suddenly a very connected town. Conwy station was opened on 1 May 1848, opening its doors to the Victorian traveler and ‘mass’ tourism for both day trippers from the industrial towns of Northern England and the Midlands and for those visiting the nearby Queen of resorts Llandudno.

During the 60s and following decades, Conwy battled against some pretty brisk head winds, the steady decline and subsequent under investment of British tourism especially seaside resorts as the British public began holidaying overseas via cheap package holidays. Traditional market towns and their high streets began to suffer from the ever-increasing march of supermarkets and out of town retail parks, and Conwy had the added disadvantage of vastly increased traffic on the roads, with the main trunk road to Bangor, Caernarvon, Anglesey and Ireland running through the centre of Conwy, and past the front door of the Erskine. Making Conwy virtually inaccessible to visitors and a pretty busy and polluted place if you could get there. The opening of Conwy tunnel in 1991, which took five years to build and was the first immersed tube tunnel built in the UK, allowed Conwy to breathe again in both a literal and metaphorical sense. Conwy in recent years has undergone something of a renaissance, with British tourism once again gaining in popularity especially in North Wales, the rise in demand for quality local produce sold by independent retailers and traffic now sailing by Conwy unnoticed under the estuary.